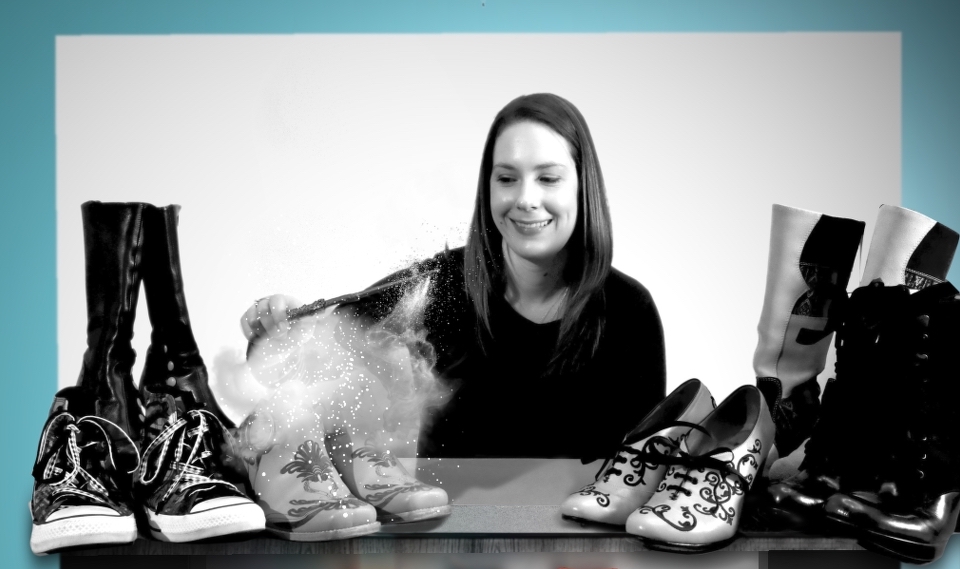 “Why don’t you go work on movies?”

That’s what Sarah’s aunt asked her when she was in high school. Surely it can’t be that simple. A person from the Midwest doesn’t just go work in movies and television, right? Wrong!

This sweet suggestion was the spark that gave Sarah Thomas the idea to pursue a career in TV and film. She enrolled in The Art Institute and began studying and training to make her dream career a reality.

After graduation, she had two options—Move to the east or west coast and do freelance work, or stay local and see what she could find. The notion of freelancing didn’t appeal to her, so she opted to stick around Minnesota.

Around that time, Steve Medin was just starting VOLT Studios and was in need of an employee to handle photoshop work. Sarah’s name was suggested by a colleague, and she went on to be Steve’s assistant for seven years.

But eventually, Sarah felt like she’d done everything she could at her position and decided she wanted to move on. So, she took a break to travel to Peru and came back to work in VFX and Post-Production (Finishing) using Flame software.

Six years later, she’s still happily filling this role at VOLT and has been recognized as one of the 32 Under 32 by AdFed. She’s also one of the few females in the industry working as a Flame artist, and VOLT is proud to have her on the team.

“In a field that’s been predominantly filled by men, it’s really cool to see a talented female like Sarah breaking into the industry,” says Jim Martin, Director of Marketing for VOLT. “We’re lucky enough to have Sarah on the team when she could easily be out in L.A. or New York.”

Now that you’ve got some of Sarah’s background, let’s jump into some questions!

How would you describe your job to an outsider?

I make video productions look pretty! Once a project comes to us, we can fix patchy grass, add more leaves to trees, remove logos.

We clean up the videos and make them as attractive as possible because whether you’re shooting inside or outside, there are always factors you can’t control.

For example, if a client was filming outside and the weather wasn’t cooperating, we have to make it look like it was sunny that day instead of cloudy (or vice versa).

What’s been your favorite project so far?

There was a span of two months where our Subaru and Cadillac commercials used songs by The Black Keys from the Brothers album.

The Black Keys happened to be one of my favorite bands, and I got to work with their songs before they blew up and their talent rights got too expensive. That was really cool.

What would you work on if you could pick any project?

Where do you see Flame and other Finishing software going in the future?

I was doing research to see what other companies use. Flame, Nuke, and Houdini are the top three, and I don’t see them going anywhere.

They each do different things and there are features of the others I’d like Flame engineers to implement, but overall I like it a lot. We use Flame for VFX and everything else in the process.

Word has it you have a fantastic shoe collection. Care to tell us about that?

In high school, I fell in love with Kangaroo tennis shoes. When I started driving, I would wear one pink and one green shoe. Eventually, this interest transitioned into heels, which I think are fun.

What are your thoughts on the video production industry in Minneapolis?

The one thing about Minneapolis is there aren’t a lot of new Flame artists or Post-Production Finishers in general.

I’m in the younger generation, but a lot of people younger than me are going into the creative agency side of things. The talent specific to Minneapolis is good, but the market isn’t saturated.

You love to travel. Where have you been and where are you headed?

I’ve been to Bali, Greece, Turkey, Peru, and Costa Rica within the last 10 years. Southwest Asia would be a top choice for my next place to visit.

You’re a huge Harry Potter fan. Which house would you be sorted into?

Got any advice for those who want to make it in Post-Production?

Finally, sometimes the simplest things are the worst to do and the technical things are the best. Things don’t always go as planned, so be ready for any challenge!

May 27, 2021
VOLT Studios
< PreviousBack to All PostsNext >
View Our WorkProduction During COVID-19 Get In Touch
© 2022 | VOLT Studios | All Rights Reserved. Website built by CG Marketing Group